Is Toga Bisexual? Is Toga Yandere? Who is Himiko Toga?

Is toga a yandere? Is Toga a psychopath? is Toga bisexual? What is the Himiko Toga Anime?

Is Toga Bisexual? Is Toga Yandere? – Everything] You Need to Know About the Psychopath from My Hero Academia

Is Toga Bisexual? Is Toga Yandere? We will see how people start to associate her that way!

Who Is Himiko Toga?

Himiko Toga is a villain in My Hero Academia who appears shortly after the Stain arc. She is a student at U.A. and has the ability to transform into anyone whose blood she consumes, right down to their clothing and voice.

This makes her incredibly dangerous, as she can easily disguise herself as anyone she wants and get close to them without raising suspicion.

She can also copy the quirk of the person with that she drank blood.

Drinking blood puts is in a frenzy. And she seems to be a vampire, as many thoughts.

But she is not.

She is just a little crazy.

She probably has some disorder which makes her injured and drink blood from the persons she likes.

Additionally, she is bisexual or pansexual and Yandere-like, meaning that she can be very possessive and violent when it comes to those she cares about.

Is Toga a Good Waifu?

There is a lot of speculation about Toga’s sexuality. Some people believe that she is bisexual because she drinks anyone’s blood without really caring about their gender. However, this has not been confirmed by the creators or voice actors of the show.

She is probably pansexual so the gender of the person does not matter to her.

In one manga panel, she says she loves Stain, she loves Deku-kun and she loves Ochako-Chan as well.

While the first two are men, Ochako is a girl.

So people assume that she is a bisexual, blood-drinking villain. But the writer himself has said nothing about it.

Are there any bisexual anime characters? You tell me!

[Why Zero Two is the Best Waifu] 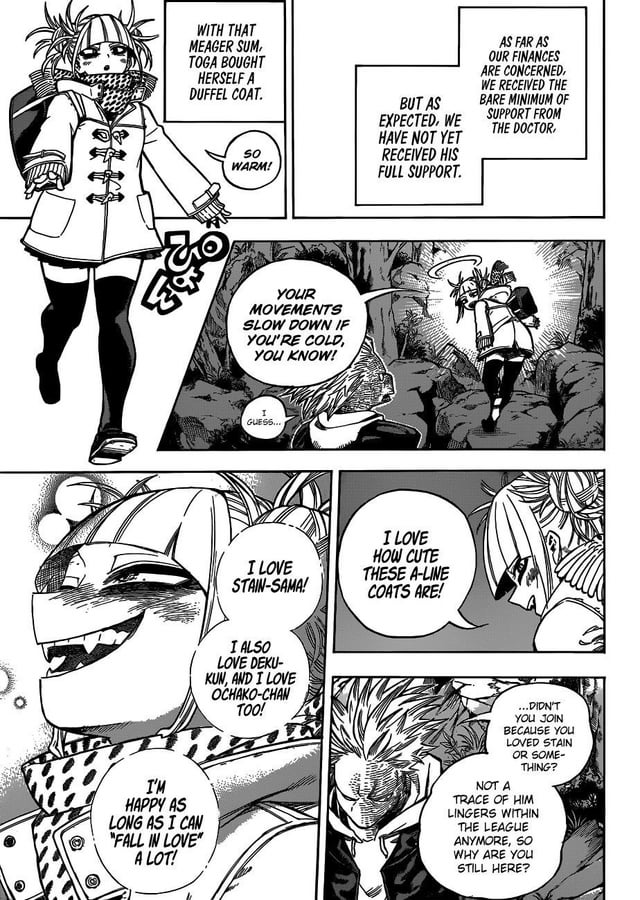 Toga does not perfectly fit the Yandere stereotype. While she is obsessive and violent, she does not have the other defining characteristics of a yandere, such as being possessive or shy. Himiko Toga is her real name, and she is a student at U.A high school.

Who has a crush on Himiko Toga?

Twice started to like Toga. So he may have a crush on her. But Toga from MHA has a crush on Stain and Ochako. And she probably feels a soulmate connection with Deku.

Toga likes people who have blood on them. And she first saw Deku injured and bleeding. She probably likes bleeding people or animals or wants to see blood from the people she loves. Deku also probably looks similar to the boy from Toga’s childhood.

Why is Toga a villain?

Himiko Toga often injures people and drinks their blood. You can tell she has some mental disorder. She wants to create a society where she can do whatever she wishes. She does not want to follow orders or want to be forced to do something that she does not like. For her tendencies, she fits as a villain.

Twice loved Toga for the sympathy that she had shown to her. She also repaired his mask. But Toga probably does not have feelings of love for Twice.

They look similar but no they aren’t siblings. In the Anime and in manga it has clearly shown that their parents are different.

Is Toga a vampire?

Technically Toga is not a vampire but she loves blood and often injures her loved ones to drink blood.

Why does Toga wear a mask?

Toga wears it to mask her teeth and probably in an attempt to suppress or hide her love for blood.

How old is Toga Himiko now?

Himiko Toga is around 17 years of old in My hero academia manga.

Is Toga a psychopath?

It is never mentioned in the manga that Toga is a psychopath. But she does seem to have some disorder where she wants to drink blood from the people she loves.

Why Zero Two is the Best Waifu – Do you know?